Delwest was recently honored to be featured on the Urban Land Conservancy’s (ULC) website as ULC’s spotlight partner for the month of April 2016.

“Congratulations to our amazing partner Delwest,” Tony Pickett, ULC’s Vice President of Master Site Development, wrote in the post announcing Delwest’s selection. “I am beyond proud to see the substantial community benefit of long term superior market quality affordable rental housing open in conjunction with Denver’s A Line. Mayor Hancock’s vision for the ‘Corridor of Opportunity’ is fully underway with our contribution of 156 rental units available to residents earning 60% AMI and below, only steps away from rail and high frequency bus along Colorado Boulevard. I know hundreds of families now have an affordable option for housing as well as access to vital services, jobs and education that are imperative for an outstanding quality of life.”

Delwest recently worked in partnership with ULC on the $35 million transit-oriented Park Hill Station multifamily apartment project, which has provided the Denver metro area with a new affordable housing option near the new 40th and Colorado Boulevard Commuter Rail Line station. The 2.5-acre site at 4055 N. Albion Street had previously been purchased by ULC and is now home to 156 affordably priced one-, two- and three-bedroom apartments with close proximity to downtown Denver. Park Hill Station is also a convenient two stops from Union Station and five stops from Denver International Airport (DIA) on the commuter rail line.

We are currently working through a waitlist of more than 1,000 residential applications and expect the entire community to be fully occupied by June 2016.

“As a Denver resident since the early 1990’s, I have seen the city undergo rapid change, and face an immediate affordable housing dilemma,” Delwest President and CEO Joe DelZotto told ULC. “As the President of a company whose primary focus is property development and redevelopment, I knew we had to step forward and help increase the number of affordable housing options for families who cannot afford market rate alternatives. I hope to see Delwest as a front-runner in the affordable housing market here in Denver.”

ULC’s Partner Spotlight program celebrates the achievements of ULC and its partners in the Colorado real estate industry that have helped it “create and preserve nonprofit facilities and affordable housing for communities in metro Denver.” The recognition is given to partners that most directly demonstrate the value of collaboration in forwarding the ULC’s mission to improve the lives of Denver area residents.

ALL RIGHTS RESERVED, DELWEST © 2020 MADE IN COLORADO 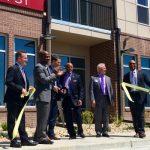 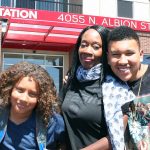